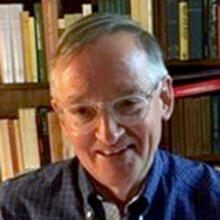 Joseph Solodow was educated at Columbia and Harvard. He is CSU Professor Emeritus of World Languages and Literatures at Southern Connecticut State University, where he taught Spanish and Spanish-American literature in addition to Latin.

In 1980–81 he held a Rome Prize Fellowship at the American Academy in Rome. Since becoming associated with the Yale Department of Classics, in 1985, he has given a wide variety of courses: the history of Latin literature, Virgil, Ovid, elegiac poetry, images of early Rome in Augustan literature, Roman dining, Roman friendship, Roman myth and pastoral, Roman comedy, Lucretius the Epicurean vs. Seneca the Stoic, Latin prose composition, the Greek historians.

His research interests lie in Latin literature and philology and in ancient historiography — more particularly in Catullus, the Augustan poets and Livy, Ovid, Latin prose style, and the history of the language, all the way to its Romance descendants. He considers his forte to be the use of philology as a tool of literary criticism. His teaching, which ranges more widely, includes western literature read in translation.

His major publications are The Latin Particle Quidem and The World of Ovid’s Metamorphoses. The Modern Language Association awarded the Scaglione Translation Prize to his rendering of G. B. Conte’s history of Latin literature into English. His latest book is Latin Alive: The Survival of Latin in English and the Romance Languages. At the moment he is preparing a literary commentary on Livy XXI.

The World of Ovid’s Metamorphoses

Latin Alive: The Survival of Latin in English and Romance Languages