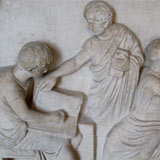 Students without any previous Latin and Greek can start both languages at Yale. You can commence either language during the Fall or Spring semester (or during Yale’s Summer session).

The normal four-semester sequence is Latin or Greek 110a, 120b, 131a, 141b. The double-credit Spring course, Latin or Greek 125b, combines the syllabi from the two courses 110a and 120b. If you have some previous knowledge of Latin or Greek and wish to continue your studies at Yale, you will be placed into the appropriate level. Please contact the Director of Undergraduate Studies, Pauline LeVen (pauline.leven@yale.edu), for further information.

Latin 110a The Elements of Latin Grammar (Fall)
Latin 110a provides a thorough introduction to the language of the late Roman Republic and early Empire. While learning and consolidating translation skills, students read brief works of Catullus, Caesar, and Cicero, among other authors, which provide a solid foundation for the study of all Latin. Textbooks: Moreland and Fleischer, Latin: An Intensive Course. Garrison, The Student’s Catullus

Latin 120b Beginning Latin: Review of Grammar and Selected Readings (Spring)
Latin 120b is a continuation of Latin 110a. The study of elementary grammar is completed followed by readings from a wide variety of classical authors with an emphasis upon careful translation and appreciation of the Latin language and culture. Textbooks: Moreland and Fleischer, Latin: An Intensive Course. Hammond and Amory, Aeneas to Augustus

Latin 125b Intensive Beginning Latin (Spring)
Latin 125b is a double-credit spring course, which covers the material from Latin 110a and 120b in a single semester. Textbooks: Moreland and Fleischer, Latin: An Intensive Course. Garrison, The Student’s Catullus, Hammond and Amory, Aeneas to Augustus

Latin 131a Latin Prose: An Introduction (Fall)
Latin 131a further develops translation skills with readings of longer works of prose and some poetry. Textbooks: vary from year to year

Latin 141b Latin Poetry: An Introduction (Spring)
Latin 141b covers a book or two or Virgil’s Aeneid, with attention to language, culture, and meter. Textbooks: vary from year to year

Greek 110a The Elements of Greek Grammar (Fall)
Greek 110a is an introduction to Ancient Greek that covers the alphabet, morphology, and syntax of the classical Attic language. Brief selections from Menander, Sophocles, and the New Testament, among others will be read. Textbooks: Hansen and Quinn, Greek: An Intensive Course

Greek 120b Beginning Greek: Review of Grammar
and Selected Readings (Spring)
Greek 120b completes the study of elementary grammar from Greek 110a. Readings include works of Plato, Aesop, Theophrastus, and Lucan, with special attention to grammar review and development of translation skills. Textbooks: Hansen and Quinn, Greek: An Intensive Course. Helm, Plato: Apology, Freeman and Lowe, A Greek Reader for Schools

Greek 125b Intensive Beginning Greek (Spring)
Greek 125b is a double-credit spring course, which covers the material from Greek 110a and 120b in a single semester. Textbooks: Hansen and Quinn, Greek: An Intensive Course. Helm, Plato: Apology. Freeman and Lowe, A Greek Reader for Schools

Greek 131a Greek Prose: An Introduction (Fall)
Greek 131a includes readings from Plato, Lysias, and Herodotus, which provide students with the experience of translating longer continuous texts. Textbooks: Campbell, Plato: Crito. Campbell, Lysias: On the Murder of Eratosthenes, Barbour, Selections from Herodotus

Greek 141b Homer: An Introduction (Spring)
Greek 141b provides a thorough introduction to the language and poetry of Homer through the close study of the epic dialect, meter, and vocabulary in selected books from the Iliad or Odyssey. Textbooks: vary from year to year