Why Study Latin and / or Greek? 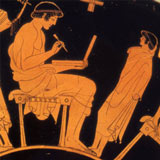 A knowledge of Latin and Greek is integral to understanding the literature, culture, and history of ancient Greece and Rome. Taken together, the literatures of these civilizations span a chronological period from the eighth century BCE to the sixth-century CE and a geographical area from Britain, France, and Spain in the West, Mesopotamia in the East, the Danube in the North, and the Nile in the South. In an era where we place so much emphasis on the global study of culture, the peoples and lands brought together by the Greek and Latin languages constitute a compelling subject for study. What is more, both languages continued: Latin was a vital intellectual language in the Medieval and Renaissance periods, and Greek was the language of Byzantine culture from where it continued to develop into the modern language spoken today in Greece.

From the perspective of World Literature, many of the surviving Greek and Latin works continue to be regarded as some of the best literature written in the history of human civilization and reading them in the original languages opens up a world of cultural references that are otherwise hard to grasp. Imagine reading Homer’s Iliad and Odyssey, Sophocles’ Antigone, Thucydides’ History, and Plato’s Republic in Greek, or the poems of Catullus, Cicero’s speeches, Virgil’s Aeneid, Ovid’s Metamorphoses, and Tacitus’ Annals in Latin and a whole lot more besides …

It is also common to study of Greek and Latin as a basis for the study of further languages, especially Indo-European languages, or for other fields of study such as Medicine. The language of human anatomy largely derives from Greek and Latin, from the bones of the inner-ear (the incus, stapes, and malleus — Latin for anvil, stirrup, and hammer) to ‘prodromal’ symptoms — symptoms that indicate the onset of a disease (from Greek prodromos (πρόδρομος) — forerunner).

Can I study Classics if I have never studied Greek and Latin Before?
Absolutely! In the Fall we offer Introductory language classes in Latin and Greek (LATN 110 and GREK 110) for students who have yet to study Latin or Greek. We also offer double-credit intensive beginners’ classes in the Spring semester (LATN 125b and GREK 125b. These are intensive courses that are designed to give everyone the language In addition to giving students a strong foundation in grammar, these courses will also get you reading Latin and / or Greek literature.

What if I have studied some Latin or Greek but it was a long time ago, and I need to revise and consolidate what I learned?
With our beginners’ classes (LATN 110a, 120b, and 125b, and GREK 110a, 120b, and 125b) the aim is to provide every student with good Latin and / or Greek regardless of prior experience. These courses can be taken by students who might have learned some Greek or Latin in the past but have not yet reached basic proficiency in either language.

Can I do the Classics Major specializing in just one language?
Yes. Yale offers B.A. degrees in Classics (Latin) and Classics (Greek). If opting for either degree, you are encouraged to study the other language to intermediate level.