Yale philosophers David Charles, Verity Harte, and Brad Inwood have forged a new venture: a five-year project, wholly Yale-based, bringing a group of faculty and graduate students together annually over five days to read works of Aristotle’s Parva Naturalia, a connected series of (mainly) short texts on topics in philosophical psychology widely recognized as essential complements to Aristotle’s more famous — and more widely read — work of psychology, De Anima. The (invitation-only) seminar began in June 2016 and will meet annually in New Haven. This project, generously sponsored by the Provost’s Office, is a sequel to the extended seminar on Plato’s Republic held jointly with King’s College London over the past 10 years 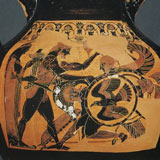 In any one year, Yale typically hosts several talks in ancient philosophy given by distinguished ancient philosophers from all over the world, sponsored by the Departments of Classics and Philosophy or by our very active Working Group in Ancient Philosophy. In addition, in recent years, a number of distinguished ancient philosophy specialists have visited at Yale for longer periods ranging from one week to a semester. Yale is also committed to a series of multi-year seminars on central works and problems in ancient philosophy, which draw distinguished faculty from universities in North America and abroad. After a ten-year study of Plato’s Republic (in conjunction with King’s College, London) Yale is now hosting a five-year seminar on Aristotle’s Parva Naturalia; it will meet annually at Yale for five days, in June.