The Major in Classical Civilization 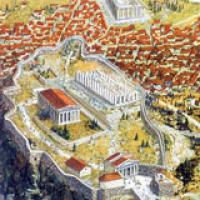 The major in Classical Civilization is designed to offer students an opportunity to study an entire civilization from a wide range of perspectives. It is a flexible program that allows students to take a range of courses in a number of departments, and thus tailor their degree to their own specific interests. Areas of specialization include the literature, history, philosophy, religion, art and archaeology of Greek and Roman antiquity from the earliest beginnings in Bronze Age Greece to the Middle Ages. The culture of the ancient world is studied for its intrinsic artistic value, its historical significance, and its power to illuminate problems confronting contemporary society. Apart from the required language component, all courses are taught in translation. In their final year students in the major have the opportunity to work on a project of their own choosing.

Admission to the major

There are no formal prerequisite courses. Students need either Greek or Latin at Intermediate level for this program: they should therefore start Beginners Greek or Latin as soon as possible. All students interested in majoring in Classical Civilization should meet with the director of undergraduate studies, Andrew Johnston (andrew.johnston@yale.edu), as soon as possible to discuss a program of study, and no later than the beginning of the junior year.

Requirements for the Major

The requirements for the major are:

It is strongly recommended that candidates elect one course each in the general areas of ancient epic, drama, philosophy, and Roman civilization. Candidates for the major are encouraged to take related courses in other departments.

Senior requirement for the Major

Students are required to take a one- or two-term tutorial (CLCV 452 for one term, CLCV 450a and, 451b for the two-term essay) in their senior year. This may be taken with a faculty member of the student’s own choosing. A dissertation or project reflecting the year’s work must be submitted at the end of the second semester (the deadline is April 13 of the senior year).

Course-numbers in Classical Civilization are intended to give an approximate indication of level: