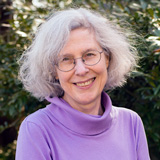 PhD ‘79, was such an inspiring teacher as a graduate student that Timothy Bahti (Comp Lit PhD ’80) named an annual teaching prize in her honor. Roberts is currently the William R. Kenan Jr. Professor of Classics and Comparative Literature at Haverford College. There she teaches Greek and Latin from the elementary level through advanced literature, as well as courses that are comparative in nature and look beyond ancient Greece and Rome to the later literary tradition, exploring (for example) the history of literary theory, the development of the conception of the tragic, the varieties of intertextual relationship between Greco-Roman literature and other literatures, and the theory and practice of translation. She also teaches Haverford’s only course on children’s literature.