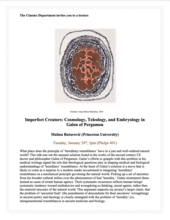 Event time:
Tuesday, January 24, 2023 - 5:00pm
Location:
PH 401 See map
Event description:
Imperfect Creators: Cosmology, Teleology, and Embryology in Galen of Pergamon
What place does the principle of ‘hereditary resemblance’ have in a just and well-ordered natural world? This talk sets out the unusual solution found in the works of the second century CE doctor and philosopher Galen of Pergamon. Galen’s efforts to grapple with this problem in his medical writings signal the role that theological questions play in shaping medical and biological understandings of ‘hereditary’ resemblance. At the heart of Galen’s solution is a move that is likely to come as a surprise to a modern reader accustomed to imagining ‘hereditary’ resemblance as a mechanical principle governing the natural world. Picking up a set of anxieties from his broader cultural milieu over the phenomenon of bad ‘heredity,’ Galen reinterprets these instead as cases of errant human agency. Their systematic recurrence reflects human beings’ systematic tendency toward misbehavior and wrongdoing as thinking, moral agents, rather than the material structure of the natural world. This argument supports my project’s larger claim: that the problem of ‘ancestral fault’ (the punishment of descendants for their ancestors’ wrongdoing) in ancient poetry and theology is closely entangled with the problem of ‘heredity’ (or, intergenerational resemblance) in ancient medicine and biology.
–
Reception to follow.