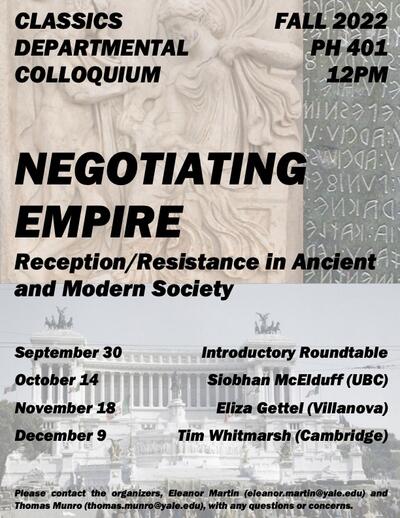 The Classics Departmental Colloquium for 2022-23, “Negotiating Empire”, investigates the manifold ways in which individuals throughout history have negotiated the presence of the Roman Empire, in all its forms. A famous poet or philosopher’s explorations of the conceptual boundaries of empire are of no more significance to this project that the day-to-day interactions between a provincial and the long arm of the imperial administration. Likewise, claims to control the legacy of the Empire in modern society are no more important as instances of reception than the rejection of Rome’s inheritance.

The subtitle of the colloquium, “Reception/Resistance in Ancient and Modern Societies” offers two broad ways of dealing with the empire, which need not be mutually exclusive. Reception need not be a passive act, nor must resistance imply rejection alone; instead, it might also be used of a ‘confrontation’ with a concept or lived reality, whereby a receiving individual seeks to comprehend, master, or alter the object of confrontation. Every engagement adds nuance to the picture we have of the Empire and allows us to engage in a constant process of re-conceptualization. In particular, we hope to bring together ancient historians, cultural historians, and practitioners of reception studies to engage in productive interdisciplinary dialogue and cast new light on the way that Rome has been experienced and conceptualized throughout history. To achieve this, we have not only invited speakers with relevant research to the theme, but have also planned two collaborative sessions for the Yale Classics community, to draw on our distinct strengths in both social history and reception studies.

Please contact the organizers, Eleanor Martin (eleanor.martin@yale.edu) and Thomas Munro (thomas.munro@yale.edu), with any questions or concerns.