The Roman poet Ovid wrote the Heroides, a series of letters written from the perspective of several women from Greco-Roman myths. The unsigned collection falls under the genre of pseudepigrapha, a genre of writings where the true author of a work is not the author to whom the work is attributed. Through these pseudepigraphic epistles, the heroines of several myths conveyed their frustration, anguish, and anger towards their male lovers. The seventh letter in Ovid’s collection is sent from Dido to Aeneas, and it portrays her despair in the last moments of her life as she makes a final attempt to convince him to stay in Carthage after he abandons her. “Heroides 7.5: Aeneas to Dido” is Charnice Hoegnifioh’s pseudepigraphic epistle written from Aeneas’ perspective as an indirect response to Dido’s letter. 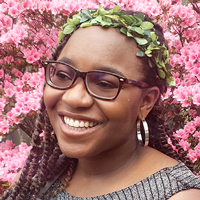 Charnice Hoegnifioh is a first-year student at Yale College double majoring in Classical Civilization and Molecular Biophysics & Biochemistry. She is very interested in exploring all aspects of Greco-Roman antiquity, and she plans on integrating her scientific and medical pursuits with her studies in the humanities of the ancient world.