The piece is composed in lyric dactyls, reminiscent of the heroic dactylic hexameter of epic. I diverge from the meter in a few instances: the last foot of a few of the lines is an iamb and I substituted several of the dactyls with spondees. In composing the melodies, I looked at modern transcriptions of ancient greek music in order to get a sense of the type of contours and lines that were used. I also took into account the rhythm, making sure that the long and short metric patterns were reflected carefully in the melody. The pitches I used were almost entirely composed using the Greater Perfect System starting on A. 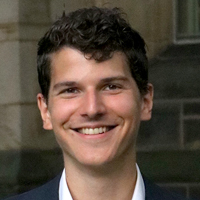 Samuel Walter is currently pursuing an MMA in cello performance at the Yale School of Music. However, he is also particularly interested in Political Philosophy and Classics. Aside from his musical and academic pursuits, he has worked part time as a portrait painter for the past five years.