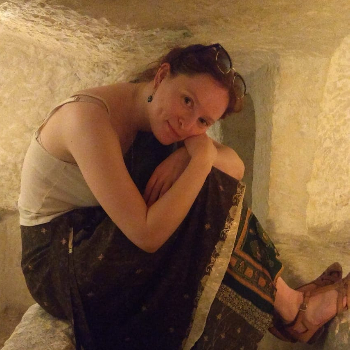 Mary is a first-year graduate student in the Combined Programme in History and Classics. Her research predominantly focuses on the Hellenistic Period, and she has a keen interest in cultural interaction, intellectual history, and religious syncretism. In particular, she currently plans to eventually write her dissertation on alchemy within Graeco-Roman Egypt. Mary strives to employ interdisciplinary approaches within her work, and thus she often finds herself traversing the liminal spaces between various departments/disciplines. As a result, she self-identifies as the Mongrel of the Yale Classics Department.
Before coming to Yale, she completed her BA (Hons) in Classics and Oriental Studies (Egyptology), as well as her MSt in Ancient History (Distinction) at St John’s College, Oxford. Her Honours thesis considered the articulation of power and legitimacy of Antiochus III in Asia Minor, with a particular focus on numismatic iconography. For her Master’s thesis, she investigated Ptolemaic Queenship, through the case study of Cleopatra I as ‘Mother of the Dynasty.’ She hopes to continue to draw upon both her Classical and Egyptological training throughout her time at Yale.
In addition to her studies in Oxford, Mary spent a year in Munich as one of the Stiftung Maximilianeum Scholars. During this time, she was a Programmstudentin in History at the Ludwig Maximilian Universität. Here, she wrote and delivered a number of seminar papers in German, and particularly enjoyed branching out to study some Medieval Art History.
Please feel free to reach out to her at mary.curwen@yale.edu