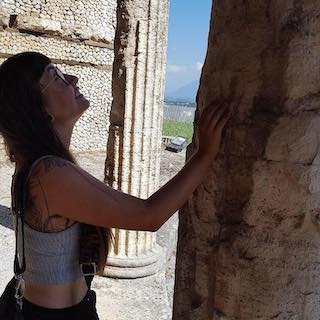 Meghan Poplacean is a PhD candidate in the departments of History and Classics. She received a BA in Classics and International Development from McGill University (2015) and an MA in History from McGill University (2017). Her thesis ‘The Business of Butchery: Bellona and War, Society and Religion from Republic to Empire’ explored the central role the goddess Bellona played in Roman war-making.

Her research focuses upon ritual and society in ancient Rome with particular interest in the Roman Republic. Her dissertation explores the problem of human blood and Roman ritual, investigating not only the many social taboos surrounding human sacrifice and bloodshed in sacred settings, but also the numerous instances in which the use of human blood was not only permitted, but prescribed. In order to answer this question, this project focuses upon the very nature of blood from a variety of perspectives: scientific, philosophical, literary, material among others.

Other research interests: trauma and ritual, women’s ritual, rituals of birth, death, and marriage, rituals of war, Bellona, Isis, Cybele, Brauron, Iphigeneia, and Artemis among others.