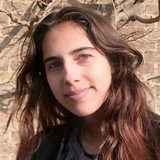 Sydnie joined the department in the Classical Philology track in 2020. Originally from Los Angeles, California, she received her BA in Classics from Cornell University where she became accustomed to the cold and wrote her Honors Thesis on the relationship between female persuasion and agency in the Iliad and Odyssey. She is primarily interested in Greek epic and lyric poetry, but has many additional interests ranging from the ancient novel, to ancient magical practices, to cross cultural exchange in the Late Bronze Age.

In addition to her studies at Cornell University, she spent time abroad at the University of Cambridge, Pembroke College where she focused on Sappho and Greek prose composition. Additionally, she has conducted summer study at College Year in Athens on the relationship between Egypt and the Bronze Age Aegean.