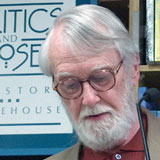 PhD ‘65. I have many fond memories of the two years (1960–62) it took to satisfy my course requirements and commence on my dissertation. I was among about a dozen new candidates for the doctorate and we were a congenial bunch who spent our days, and some evenings, in Phelps Hall studying for our courses with Bernard Knox, C. Bradford Welles, Ann Perkins, Ralph Ward, Alfred Bellinger, and other eminent classicists. One amusing recollection is of a bogus classical journal series that many of us contributed to. We titled it Hysteria and frequently added pages to its large loose-leaf binder. It contained our attempts — in all good humor and with due respect — to satirize and parody the field of study that we all dearly loved. I wonder if that binder is still there on a shelf in the Phelps Hall Classics Library. A 1965 Yale Classics Ph.D, I taught Greek and Latin languages and literature and ancient history for the decade of the 1960s at the Universities of Pittsburgh and Colorado, Tufts University, and Brock University (Ontario) before departing the academic life in 1969 and becoming an author, editor, journalist, and broadcaster in the field of jazz and popular music, which I had been closely observing since the early 1940s. I was editor of Jazz Notes (the quarterly journal of the Jazz Journalists Association) from 1992 to 2001, the Washington Post’s jazz critic for a decade beginning in the late 1970s, editor of JazzTimes for several years in the 1980s, and hosted my weekly shows “I thought I Heard Buddy Bolden Say ….” and Since Minton’s on public radio in the 1970s and ’80s. I am the author of The Jazz Scene: An Informal History from New Orleans to 1990 (Oxford University Press, 1991), Swing Era New York: The Jazz Photographs of Charles Peterson (Temple University Press, 1994), Living the Jazz Life: Conversations with Forty Musicians about Their Careers in Jazz (Oxford, 2000), and Growing Up With Jazz: Twenty-Four Musicians Talk About Their Lives and Careers (Oxford 2005). My trilogy of novels Backwards Over will see publication in 2013 and I am currently at work on a memoir and A W. Royal Stokes Jazz, Blues & Beyond Reader. A full account of why I changed career paths in mid-life can be found here.