2022 Epic Futurity from Homer to Milton: the Phaeacians, Dido, and the Tradition

The lecture was held by David Quint, Sterling Professor of English and Professor of Comparative Literature,  Thursday April 7, 2022.

2021 “Surely in many ways I hold different views from others’: racialized gender in ancient Hellenic and Roman societies.”

The 2021 lecture was delivered by Shelley Haley, Edward North Chair of Classics and Professor of Africana Studies, and President Elect of the Society for Classical Studies. The lecture is jointly sponsored by the Departments of Comparative Literature and Classics, and supported by generous gifts from Professor Gilbert Lawall (PhD ‘61), Classics Professor Emeritus at the University of Massachusetts, Amherst, and from James M. Morris (PhD ‘68), of Washington, DC.

2019 Translating the Classics again: How and Why”

Emily Wilson, Professor of Classical Studies at the University of Pennsylvania. Read more about Professor Wilson.

2018 The Weeping Heraclitus and Laughing Democritus

Glenn Most, Professor of Ancient Greek at the Scuola Normale Superiore in Pisa and a member of the University of Chicago’s Committee on Social Thought.

More about Professor Most.

Dr. Joshua Scodel, Professor of English and Comparative Literature, The University of Chicago

Joshua Scodel is Helen A. Regenstein Professor at the University of Chicago. He has a BA from Princeton and PhD from Yale. He has published two acclaimed books, The English Poetic Epitaph and Excess and the Mean in Early Modern English Literature, as well as many articles on Donne, Jonson, English translations of classical and continental lyrics 1550-1660, Cavalier love poetry, Interregnum retirement literature, the Restoration Pindaric ode, the English lyric 1650-1740, seventeenth-century English literary criticism, and Dryden’s critical principles. He has recently co-edited a critical edition of Queen Elizabeth I’s translations, and is currently writing a book on the paradoxes of early modern English representations of liberty.

2015 The authorial perversion: the desire for discourse in Ovid’s Amores

Ellen Oliensis is Professor of Classics at the University of California, Berkeley, where she moved in 1999 from a position at Yale as Associate Professor of Classics and the Humanities. She has a BA from Yale and PhD from Harvard. She is well known for her work on Horace, including the remarkable Horace and the Rhetoric of Authority (1998), and more recently on psychoanalysis and Roman poetry in Freud’s Rome (2009, in the Cambridge series, Roman Literature and its Contexts), among many other elegantly and economically written studies of Latin literature. She is currently working on a commentary on Metamorphoses 6 for the Cambridge Green and Yellow series, and on a monograph on Ovid’s Amores.

Gordon Braden is Professor of English at the University of Virginia. His books include The Classics and English Renaissance Poetry (1978), Renaissance Tragedy and the Senecan Tradition (1985), The Idea of the Renaissance with William Kerrigan, (1989), Petrarchan Love and the Continental Renaissance (1999), Sixteenth-Century Poetry: An Annotated Anthology (2005), The Oxford History of Literary Translation in English: 1550-1660, with Robert Cummings and Stuart Gillespie, and Petrarch’s English Laurels, 1475–1700, with Jackson Campbell Boswell, (2012).

2013 The Ghost of Patroklos and the Language of Achilles 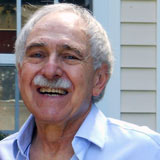 Joseph Russo, who studied with Adam Parry at Yale, has spent a lifetime teaching and writing about the Homeric epics and oral traditions, including folklore, folktale, and Sicilian oral traditions. His work throughout his career has demonstrated the methods and talents that were once so beautifully exemplified by the Parrys: the thoughtful and detailed analysis of Greek and Latin texts that is, at once, adventurous, elegantly written, and critically informed. 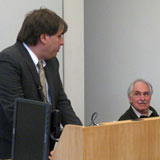 Professor Russo’s lecture on ‘The Ghost of Patroklos and the Language of Achilles’ was a masterful example of this kind of scholarship, and a perfectly fitting inauguration of this series. Elaborating on Adam Parry’s landmark 1956 essay, ‘The Language of Achilles,’ Professor Russo described how Parry’s assertions about the inadequacy of heroic language to express non-heroic emotions were, despite making a dazzling first splash, subsequently dismissed as a kind of passé Whorfism. But he made a compelling case for the abiding genius of the essay that overrides its flaws, pointing out that Homeric language as an artificial product necessarily comes with Whorfian constraints, and yet the poet can manipulate these inadequacies to express subtle emotions obliquely but effectively.

A selection of Russo’s articles (pdf)