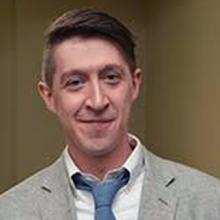 Associate Professor of Classics and (by courtesy) of History; Director of Undergraduate Studies in Classics
203 Phelps Hall
203-432-0991
andrew.johnston@yale.edu

Andrew Johnston is an ancient historian whose primary research interests lie in the field of Roman cultural history. He studied at the University of Illinois, Urbana-Champaign (B.A. Classics and History 2006) and at Harvard University (Ph.D. Ancient History 2012).

His work focuses mainly on questions of memory, identity, cultural interaction, and the representation of selves and others, both at Rome and on the peripheries of the ancient Classical world.

His first book, The Sons of Remus: Identity in Roman Gaul and Spain (Harvard University Press, 2017), examines the experiences, memories, discourses, and cultural negotiations of local communities and individuals in the provinces of the Roman West, telling the stories of the other side – and the others’ side – of Empire.  It won the First Book Award (2019) from the Classical Association of the Middle West and South, and the Charles J. Goodwin Award of Merit (2019) from the Society for Classical Studies.

He is currently working on a book on the place of kingship in the Roman imagination from the middle Republic into late Antiquity (and beyond), provisionally entitled Regnum: the Fear of Kingship in Roman Culture (under contract with Harvard University Press).

He has written articles on a variety of subjects in Roman history: archaic and imperial Latin inscriptions, ethnographic discourse in Caesar and in Cassius Dio, and the place of Odysseus the wanderer in imperial Greek culture.

Additionally, he has research and teaching interests in Roman archaeology and material culture; he currently serves as Director of the Field School of the excavations of the Gabii Project, near Rome, and has published extensively on the city of Gabii.  Students interested in participating in the field school should feel free to contact him.

As the current Director of Undergraduate Studies, Professor Johnston is always happy to meet with interested students.

A. C. Johnston and M. Mogetta (2020) ‘Debating Early Republican Urbanism in Latium Vetus: The Town Planning of Gabii, between Archaeology and History.’  Journal of Roman Studies 110: 91-121.

The Sons of Remus