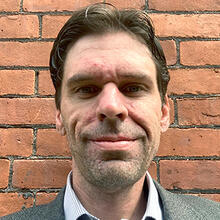 James Patterson received a BA in Classics and MAT in Latin and Classical Humanities from the University of Massachusetts Amherst. He was a Recognised Student in Philosophy at Wolfson College, Oxford and earned his PhD in Classics from the University of Texas at Austin. He is an intellectual historian with interests in all things North African, especially late antique, and an enthusiast of classical language pedagogy.

Patterson believes that teaching is most effective in a community of inquiry, and he describes his pedagogy as eclectic, knowing that no one approach works for all students all the time. Finding the classics classroom invaluable for cultural and intellectual exchange, he is eager to cross disciplinary, geographical, and chronological divides and increase access to the ancient world. His current projects include an animated audiobook of Greek and Latin morphophonology, an interactive digital sourcebook of Numidian history, and a monograph on the religious, sociopolitical, and material context of Augustine’s philosophy of memory and time.