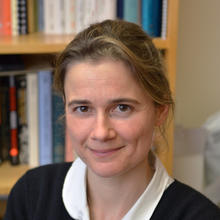 Associate Professor of Classics and (by courtesy) of Music
305 Phelps Hall
203-432-0983
pauline.leven@yale.edu

Born in Monaco and raised in France, Pauline LeVen studied at the Ecole Normale Supérieure (Paris), the Sorbonne and Princeton University, and earned a joint PhD from both in 2008. She was a Fulbright student in 2001–02 and the Phi Beta Kappa Sibley Fellow in Greek Studies in 2007–08.

Her first book, The Many-Headed Muse: Tradition and Innovation in Late Classical Greek Lyric Poetry, was published by Cambridge University Press in 2014 and was a recipient of the Samuel and Ronnie Heyman Yale College Prize for outstanding publication. The book is a study of the extant corpus of Greek songs composed between about 440 BC and 320 BC. Combining close readings of little-studied texts with attention to their intellectual and cultural context, it examines Greek literary history between the classical and Hellenistic periods and explores the vibrancy of musical culture in the late classical period.

LeVen’s most recent book Music and Metamorphosis in Greco-Roman Literature (Cambridge University Press, 2021) examines Greek and Roman narratives devoted to the music of humans-turned-non-human-animals and natural phenomena (birds, winds, frogs, echoes, insects, marsh-reeds…). It argues that fantastic tales of animal metamorphosis are important loci of reflection on aesthetic and ontological questions. The readings it offers (including of Plato’s myth of the cicadas, of Ovid’s story of the origins of the echo, and of Achilles Tatius’ narrative of the nightingale myth) are windows onto a rich web of ideas about the nature of music, the experience of sound, and aesthetic responses to song.

LeVen’s forthcoming book is a volume co-edited with Sean Gurd – the first of the six-volume Cultural History of Western Music (Bloomsbury, forthcoming 2022). Devoted to ancient musical practice from the Homeric epics to about 600 CE, the book is an important step in opening up the dialogue between Classics and musicology. It comprises eight essays by established and emerging scholars in the field, devoted to the topics of society, philosophies, popular culture, politics, education, exchange, performance, and technologies.

LeVen is currently working on two projects. The first is a monograph entitled Posthuman Lyric: Poetry and the Anthropocene, in which she investigates the kind of claims that lyric poetry (from archaic song to Imperial epigrams) make about non-human experiences of the world, and the challenges they present to Romantic views of lyric poetry as expression of the self. The second is a book co-written with Sean Gurd, provisionally entitled The Musician in Nine Greek Myths, which examines features of the social history of ancient music, starting from interpretations of ancient mythical figures. The book explores questions that have (surprisingly) rarely been asked, such as the paradoxical social status of musicians, the relationship between music and violence in the mythic imagination, or the famous but elusive relationship between music and therapy.

Music and Metamorphosis in Greco-Roman Thought