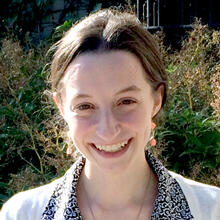 Rosalie Stoner is a Lecturer and Associate Research Scholar in the Department of Classics. She earned her AB summa cum laude in Classics with a certificate in Medieval Studies from Princeton in 2015 and her PhD in Classical Languages and Literatures from the University of Chicago in 2021. Her current book project examines Quintilian’s portrayal of the ideal orator (vir bonus dicendi peritus, “a good man skilled in speaking”) as a response to the Platonic problem of how to ensure that a trained speaker uses the power of speech for good and not for evil. She argues that, by accepting the invitation of Quintilian’s authorial persona to enter a series of relationships outlined and mediated by the Institutio—teacher and student, father and son, and friendship—the reader is empowered to experience the education of the virtuous orator and so develop the bona voluntas that Quintilian claims is the text’s most important legacy.

Her wider interests include ideals and practices of education in the ancient Mediterranean world; the Roman oratorical tradition from Cato to Augustine; early Christian transformations of classical traditions; competition and tension between rhetoric and philosophy; and Platonic reception.

Link to most recent publication

The Difficult Defense of Cicero’s Goodness in Institutio oratoria 12.1