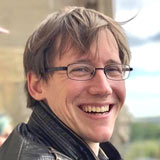 Benjamin joined the Classics and Philosophy Program on the philosophy track in 2018.